A Gift of Two Large Mandalas for Serenity Ridge

A Gift of Two Large Mandalas for Serenity Ridge 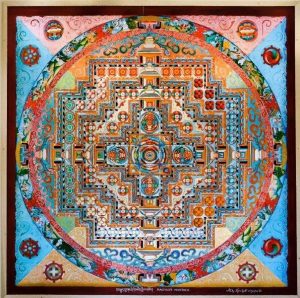 Serenity Ridge has been blessed with two amazing gifts by Mexico sangha member and longtime student of Tenzin Wangyal Rinpoche, Leonides Guadarrama: two museum-quality replicas of mandalas painted by Lama Yungdrung, one of our two resident lamas in Mexico. The first, the mandala of the Ma Gyü, graces the entry wall as one comes into Kunzang Khang. The second mandala is of Sherap Chamma, which adorns the central wall of the dining room. 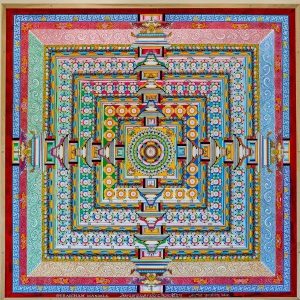 These two very large mandalas are museum-quality reproductions of original paintings by Lama Yungdrung Lodoe (and Lama Nyima Gyaltsen is a co-painter of the Ma Gyü mandala). The original mandalas are in Valle De Bravo, Mexico at the Great Stupa for World Peace.

The Ma Gyü, or Mother Tantra, is one of the most important tantric cycle of teachings in the Tibetan Bön Buddhist tradition. Tenzin Wangyal Rinpoche has taught on the six paths of meditation from the Ma Gyü, including sleep, dream, the elements, chöd, powa and the bardo. Sherap Chamma, the Mother of Wisdom and Love, is the source of wisdom, and her medicine is love and compassion. The teachings of Sherap Chamma also comprise one of the most important tantric cycles of the ancient Bön tradition. Taught frequently at retreats and online, the practice of Sherap Chamma is being offered online each month through 2020 during a 24-Hour Full Moon Practice.

Each mandala took more than six months of full-time work to complete. Leonides supported Lama Yungdrung in the technical aspects of reproducing the original works. Each of the original mandalas was copied using a professional digital camera at high resolution. A separate image was made of every square inch of the canvas, and then digitally stitched together. The digital copies are almost one terabyte in size each. Together Lama Yungdrung and Leonides selected the best paper, ink and printing company, and then matched the color output back to the original to ensure that the integrity of the painting was kept.

These mandalas possess unique qualities not seen before in traditional Bön thangka painting. To prepare for each one, Lama Yungdrung returned to the source texts for specific guidance. He found that the text, while very specific with respect to many of the features of the mandalas, is silent on other matters. For example, Lama Yungdrung widened the outer borders of the mandalas to enhance their visual impact. Also, traditionally, the four gates to the mandala are depicted closed. Lama Yungdrung chose to paint them in an open position, showing that we are always welcome into the divine presence of the deities and enlightened beings. After being shown the changes, His Eminence Yongdzin Lopon Tenzin Namdak Rinpoche stated that from now on the open gates should be incorporated into all paintings of mandalas.

Everyone who has entered Kunzang Khang since the paintings were hung has felt their almost overpowering presence and their blessing. They have changed the already positive energy of the building in an amazing way. The next time you are able to come to Serenity Ridge, see for yourself the extraordinary work of Lama Yungdrung, Lama Nyima Gyaltsen and Leonides Guadarrama.