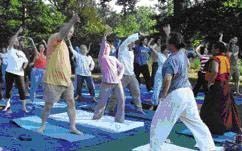 Deepen your experience of the ancient practice of Tibetan yoga (trul khor) from the Bön A-tri dzogchen tradition. The contemplative physical movements of trul khor enable participants to clear obstacles and obscurations to openness and clarity in meditation practice. Both Part 2 and Part 3 will be taught concurrently. 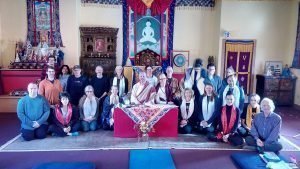 Similar to last year, both trainings will be taught by Alejandro Chaoul-Reich, Ph.D, a senior student of Tenzin Wangyal Rinpoche who has been teaching these retreats for more than 20 years. He will be joined by Rob Patzig, president and board chair of Ligmincha International, an experienced yoga teacher and trul khor practitioner.

Part 2, November 8–10, 2019: Participants will deepen the practice of the 16 trul khor movements, the outer tsa lung and the 9 Breathings of Purification. All who participated in Part 1 last fall at Serenity Ridge, or who have previously received Part 1 of A-tri trul khor with Alejandro, are welcome to attend this retreat.

Part 3, November 8–11, 2019: Participants will focus on learning to guide the practice, as well as learning more about the tradition and the place of trul khor in the teachings. Students who take Part 2 will then have the opportunity to apprentice with Ale and Rob over the 12 months after the retreat to become instructors.

In the Tibetan spiritual traditions, body, speech/breath and mind are known as the three doors to enlightenment or the natural state.The contemplative physical movements of Tibetan yoga (trul khor) of the A-tri tradition enable participants to enter all three doors through a single practice, offering a powerful, skillful means for clearing the obstacles and obscurations to openness and clarity in meditation practice.

The distinctive movements of trul khor arose as the result of deep meditation practice by Tibetan yogic adepts. Traditionally practiced in remote Himalayan caves and monasteries, the trul khor movements are now being made accessible to serious Western students. They are a powerful tool for clearing, balancing and harmonizing the subtle aspects of one’s energetic dimension.

Alejandro Chaoul-Reich, Ph.D., has been teaching these retreats for more than 20 years at the request of Geshe Tenzin Wangyal Rinpoche. A senior student of Rinpoche, he has studied trul khor with many masters of the Bön Buddhist tradition of Tibet. He is an assistant professor and director of education at the University of Texas (UT) MD Anderson Cancer Center in Houston and adjunct professor in UT’s Medical School. He teaches meditation to cancer patients and their supporters and is involved in research using tsa lung trul khor with cancer patients and their caregivers. Alejandro has recently started and directs the Mind Body Spirit Institute at the Jung Center of Houston. He received his Ph.D. in Tibetan religions from Rice University, is a senior teacher of The 3 Doors, and a contemplative Fellow of the Mind & Life Institute.

Rob Patzig, president of Ligmincha International, is an experienced yoga teacher and trul khor practitioner. Rob began the practice of yoga asana, pranayama and meditation in 2003 and has been teaching since 2005. He received his 200-hour yoga teacher certification from Sri Dharma Mitra in 2007. In 2010 he met Tenzin Wangyal Rinpoche and has been studying with and serving him and Ligmincha since. Rob began studying trul khor in 2010 with Alejandro Chaoul-Reich and regularly guides this practice at Tenzin Wangyal Rinpoche’s retreats around the world. He served as treasurer of Ligmincha from 2012–2014. In 2014 he because chair of the Ligmincha International Board of Directors, and from July 2015 through February 2019 he also served as chief financial officer. He was appointed president of Ligmincha by Tenzin Wangyal Rinpoche in 2015. Previously, Rob worked as the chief financial officer for Third Security, a private investment firm, and he also taught composition and literature at Virginia Tech. He holds degrees in philosophy and literature.