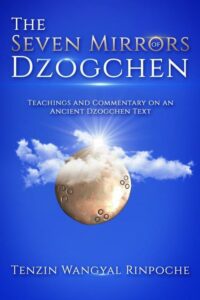 Tenzin Wangyal Rinpoche’s newest book, The Seven Mirrors of Dzogchen: Teachings and Commentary on an Ancient Dzogchen Text, is now available in the Ligmincha Bookstore and Tibet Shop. The book is based on teachings that Rinpoche gave during his 2020 summer retreat.

The teachings and commentary in this book are based on a profound text on the nature of mind called The Seven Mirrors of Dzogchen by Drenpa Namkha. He was a great Tibetan master in the late seventh/early eighth century from the ancient land of Zhang Zhung, which later became part of Tibet. It is one of the essential texts of dzogchen, the highest teaching in the Tibetan Bon tradition and some Tibetan Buddhist lineages. Dzogchen, known as the «great perfection,» points out the nature of one’s mind as clear and open, aware, and the source of all positive qualities in life.

With his ability to bring the deep teachings of ancient texts into the modern world and make them relevant and engaging for his students, Tenzin Rinpoche, through commentary and meditations, brings these ancient teachings to life. He shows how the mirrors, which are the reflection of our highest potential, are as applicable today as they were in the past. The book focuses in particular on the first four mirrors of dzogchen: the view, meditation, result and conduct. Exploring these teachings and applying them in our lives can help us open to our true nature.

Tenzin Wangyal Rinpoche, founder and spiritual director of Ligmincha International, is an accomplished author as well as a highly respected and beloved teacher to students around the world. The Seven Mirrors of Dzogchen is published by Sacred Sky Press, a division of Ligmincha International committed to making the sacred teachings and practices of the Tibetan Bon Buddhist tradition more widely available.