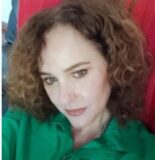 Since year 2002 she has been in contact with Geshe Tenzin Wangyal Rinpoche and she has been keeping and strengthening her spiritual growth under the shelter of the Yundrung Bön Lineage, attending innumerable retreats in Mexico and the United States. She is a graduate of the Academy of the Three Doors and a Founder Memeber of the Chamma Ling Torreón retreat center. Tenzin Wangyal named her Umzde and Instructor in Ligmincha Mexico.