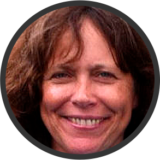 Polly Turner has studied with Tenzin Wangyal Rinpoche since 1995. She served for six years as Ligmincha’s director of communications, and for another six years as primary meditation practice leader for Ligmincha’s Charlottesville, Virginia,, sangha. Since 1992 Polly has earned her living as a writer, ghostwriter and editor. She is editor of Tenzin Wangyal Rinpoche’s books Tibetan Yogas of Body, Speech and Mind and The True Source of Healing; and former publisher/founding editor of the subscription publication Sangha Journal. Polly previously served as director of quality control for seven national health-related publications. She received her BFA from the Pennsylvania Academy of Fine Arts and the Philadelphia College of Art, taught art for four years, and continues to actively show and sell her artwork.