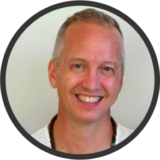 Rob first encountered Bön in 2007 and immediately felt that he had found his spiritual home. From 2012 until present, Rob has served as Chief Financial Officer In 2014 he was appointed Board Chair of the newly formed Board of Directors. In 2015 he was asked by Tenzin Wangyal Rinpoche to serve as President of Ligmincha.

Outside of Ligmincha, Rob teaches hatha yoga in the tradition of Sri Dharma Mittra. From 1996 until 2014 Rob worked professionally as the Chief Investment Officer and as a Senior Managing Director for Third Security, LLC, a private investment firm. From 2014 until 2016 he taught English at Virginia Tech and Radford University. He holds a B.A. in philosophy and an M.A. in literature from Virginia Tech. He and his wife, Eileen, live in Crozet, Virginia.