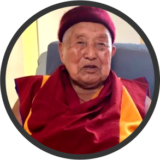 His Eminence Yongdzin Tenzin Namdak Rinpoche, Geshe Tenzin Wangyal Rinpoch’s root teacher and mentor, is revered as the most senior teacher of the Tibetan Bön Buddhist tradition and is considered the world’s foremost expert on Bön. His Eminence was born in 1926 in the Kham province of Eastern Tibet, was awarded his geshe degree in 1952 and was elected to succeed his master as lopon (principal teacher) of Menri Monastery in Tsang province. He helped build the first monastic community in India in Dolaji. Later he established Triten Norbutse Monastery in Nepal, one of the two main Bön monasteries outside Tibet, providing comprehensive study of the broad spectrum of Bon teachings and traditions.