Ligmincha’s online store is now open and offering a range of books and media related to Tibetan Bön Buddhism. Among the offerings are two new books by Sacred Sky Press, a division of Ligmincha International: Living Wisdom and Escape from Darkness. 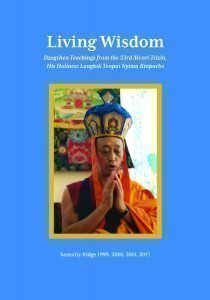 Living Wisdom presents selected, edited excerpts of teachings from four visits of His Holiness Lungtok Tenpai Nyima Rinpoche, the 33rd Menri Trizin, to Serenity Ridge in 1999, 2001, 2011 and 2013. His Holiness was the abbot of Menri Monastery in Dolanji, India, and spiritual leader of the Tibetan Bön Buddhist tradition from 1968 until his passing on September 14, 2017.

Teachings on dzogchen are among the highest offered in the Tibetan Bön tradition, pointing out the true nature of mind. The excerpts in this book include profound teachings from the 33rd Menri Trizin on the Twenty-Four Masters, subsequent Lineage Masters of the Zhang Zhung Nyen Gyü, and the Six Lamps.

Throughout his life, His Holiness the 33rd Menri Trizin worked tirelessly to preserve the ancient Bön tradition and culture. Numerous full-color photos are included. The book was first made available during the visit of His Holiness Dawa Dargyal Rinpoche, the 34th Menri Trizin, to Serenity Ridge in June 2019. 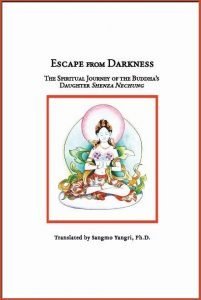 Escape from Darkness: The Spiritual Journey of the Buddha’s Daughter, Shenza Nechung

In the Tibetan Bön tradition, there have been numerous female lay and nun practitioners who attained high spiritual states. Their stories are included in Bön texts and also are a part of local folklore but have not been extricated from the texts or recorded from the folklore. This book is an attempt to fill the void that has been left for centuries.

In Escape from Darkness, the first story of a female Bön practitioner is brought to light by translating the life story of Buddha Tonpa Shenrap Miwo’s younger daughter, Shenza Nechung, and describing her spiritual journey. The book tells the tale of how the demon Khyappa Lakring attempts to defeat the teachings of the Yungdrung Bön by seducing Shenza Nechung, and how she is eventually rescued and reconnects with the dharma.

The book is translated by Sangmo Yangri, Ph.D., a scholar, teacher, translator, and the first Tibetan female to receive a Ph.D. in the area of Tibetan Bön studies. In 2015, she was appointed to the position of teacher and translator at Lishu Institute in northern India, founded by Geshe Tenzin Wangyal Rinpoche for the intensive study and practice of Bön.

The book also includes a foreword by Geshe Tenzin Wangyal Rinpoche, commentary by Sangmo Yangri, and reflections by Tsering Wangmo and Marcy Vaughn.

Ligmincha’s physical Bookstore & Tibet Shop is located at Serenity Ridge Retreat Center near Shipman, Virginia, and is open during retreats.