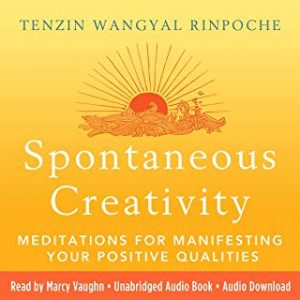 Tenzin Wangyal Rinpoche’s second audio book, Spontaneous Creativity: Meditations for Manifesting Your Positive Qualities, is now available for purchase. The book, in unabridged audible format, is narrated by Marcy Vaughn, a senior teacher and student of Rinpoche and editor of the printed book, which was published in 2018.

Rather than the standard definition of creativity, the book looks at creativity through a wider lens, as a dynamic force that animates us and connects us with every being on the planet. As Rinpoche says, creativity is not just a spark igniting the fire of inspiration. It is a way of living spontaneously from the open spaciousness of being—from the source of infinite potential and positive qualities such as love, compassion and joy.

The new audio book, published by Hay House, will be available through most major marketplaces, including amazon.com and hayhouse.com.

Rinpoche’s first audio book, The Tibetan Yogas of Dream and Sleep, also narrated by Marcy Vaughn, was released in October 2018.