As part of a long-term project to standardize the prayers and translations used throughout the many Ligmincha International centers, a translation of the standard version of the Invocation of Yéshe Walmo is now being introduced. Yéshe Walmo is an enlightened deity within the Yungdrung Bön tradition who acts to protect the religious tradition and its practitioners. This new translation is by Raven Cypress-Wood, and in the article below she explains some of the prayer’s history and changes. 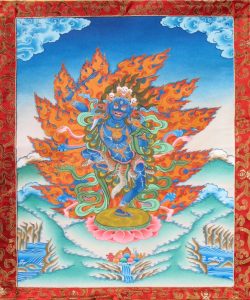 Within the Yungdrung Bön religious tradition many of the scriptures and recitations have been handed down orally for centuries. Therefore, it is not uncommon to have slight variations between different written or printed editions of the same scripture. However, throughout the Yungdrung Bön monastic tradition, communal recitations have been standardized, although the melodies of these standardized recitations can vary from monastery to monastery as each follows their own lineage. For example, Menri Monastery follows the Dru family tradition, and Triten Norbutse Monastery follows the Shen family tradition, etc.

Thanks to the translation work of John Myrdhin Reynolds, Ligmincha International had English language translations of some of the commonly used prayers available for students in the early years of the organization. This included a translation of the Invocation of Yeshé Walmo. The version of the Invocation of Yeshe Walmo that Reynolds translated is from a small prayer book that was published around 1980. That particular version, however, is not the standard one being used within the Yungdrung Bön monastic tradition. Therefore, as part of a long-term project to standardize the prayers and translations used throughout the many Ligmincha International centers and sanghas, translation of the standard version of the prayer is now being introduced.

It might be of interest to point out a few details regarding the Invocation of Yeshé Walmo and its translation. For example, the use of the term “invocation” generally means “to call upon.” However, the Tibetan term is külpa [Tib. bskul pa], more specifically meaning “to arouse” or “to call to action.” Therefore, this prayer is clearly used to call upon the enlightened protector Yéshe Walmo to quickly act on our behalf. The term shen [Tib. gshen] occurs twice in the prayer. One of these instances has been preserved in the translation in the line: “And your left hand holds a long-life vase that extends the life-force and the lifespan of shen practitioners.” In conversation with Geshe Tenzin Rinpoche, he suggested using “shen” in the translation rather than generalizing by using only “practitioners.” This term “shen” refers to the shen lineage of Tönpa Shenrap Miwoché, the Buddha and founder of the Yungdrung Bön religious tradition. “Shenrap” is a compound of the two words “shen” and “rap” together meaning “the highest shen.” In this line of the Invocation of Yeshé Walmo translation, “shen” refers to followers of Tönpa Shenrap and his shen lineage, i.e., those who have taken refuge in the Yungdrung Bön.

In the final line of the prayer, Yéshe Walmo is called upon to “pacify all obstacles and causes of disharmony without exception, into the vastness of outer, inner and secret space!” The Tibetan text specifically refers to these three spaces, kha long ying [Tib. mkha’ klong dbyings]. This indicates the ability of Yéshe Walmo to support the practitioner by destroying obstacles that range from being obvious and external to the subtlest obstacles of mind. Nothing is beyond her capability. That power combined with the doubtless trust of the practitioner can bring immediate action and support as expressed in this concise and powerful prayer.

Invocation of Yeshe Walmo (new translation in Tibetan and English)